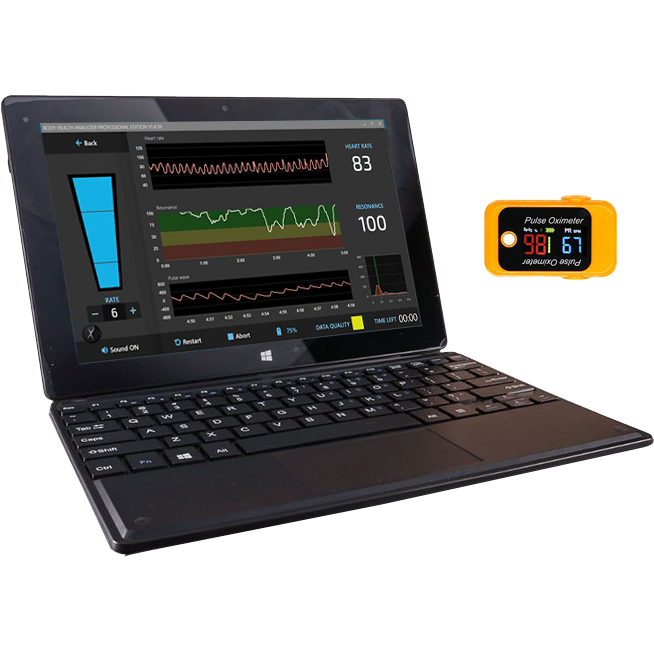 The Body Health Analyzer provides a tool for lowering stress using a biofeedback training method based on paced breathing. This process requires you to stay focused and follow the breath pacer precisely to achieve the highest levels of entrainment. 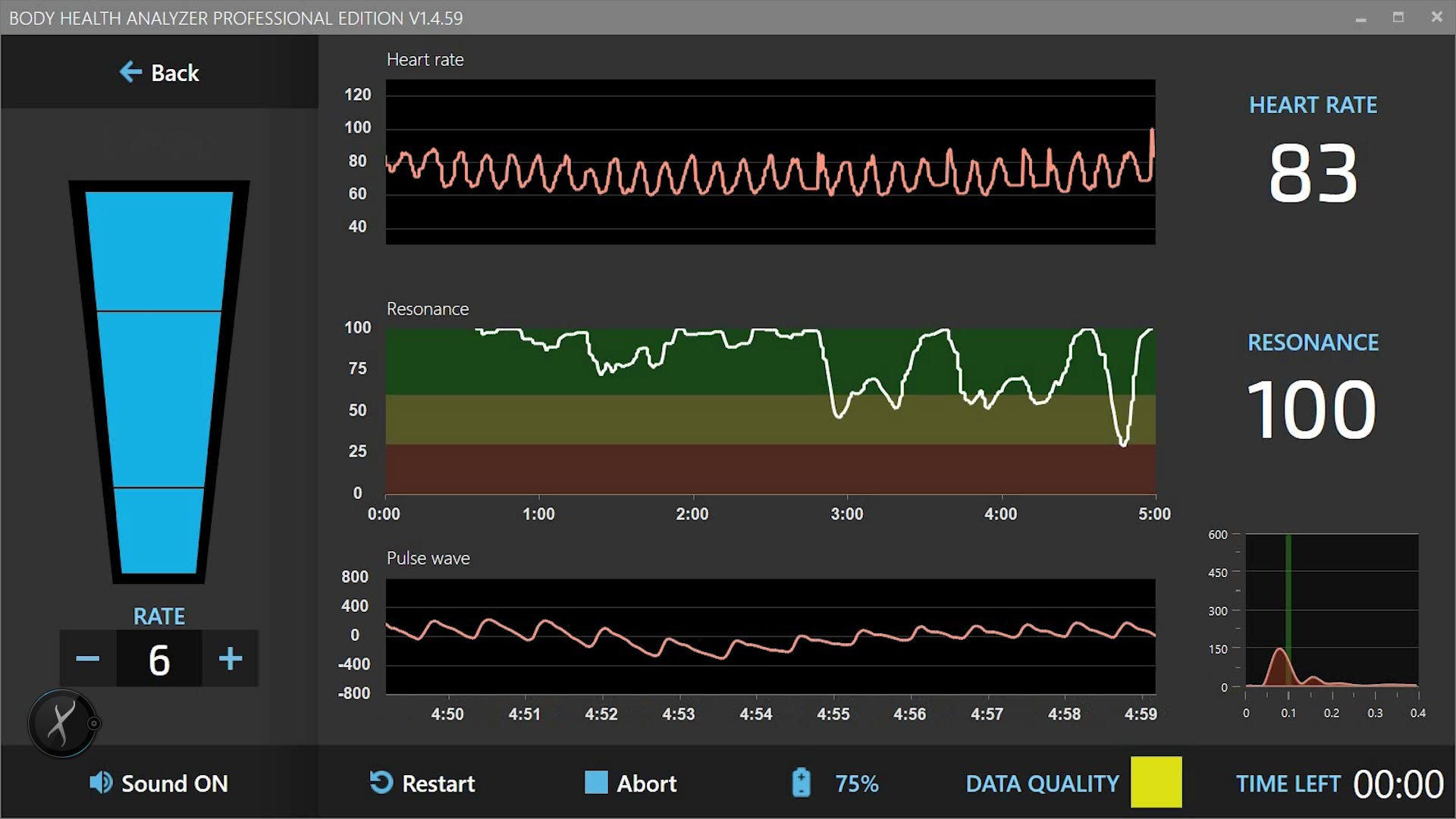 The middle graph will show the training score changes when we start the session recording.

The bottom graph shows a pulse signal. If the sensor is placed correctly, the signal shows smooth periodic waves.

TRAINING SCORE – indicates the mean level of cardio-respiratory coupling ranging from 0 to 100.

TRAINING FOCUS – indicates the quality of training focus also ranging from 0 to 100.

The report also includes HR and SCORE graphs recorded during the session to show the details of the training process.

On the left side we see a visual breath pacer as a moving bar. The client will inhale when the bar goes up and exhale when it goes down or hold breathing when the bar is not moving. The pacer is set to 6 breaths per minute by default. The client may start breathing to practice. If it is hard to follow the pacer at this rate, it may be changed using the PLUS or MINUS buttons underneath the breath guide.

There is a special graph displayed in the bottom right corner of the training screen. It shows a power spectrum of heart rate. Power spectrum is a relatively complex mathematical method showing amplitudes of different harmonics present in the analyzed signal. A set of such harmonics (or frequencies) measured in Hertz (Hz) is plotted on the horizontal scale. Their amplitudes are plotted on the vertical scale. Imagine that the heart rate changes are an ideal sine wave at 0.1 Hz frequency. In this case the power spectrum graph would show only one spike at that frequency. In reality heart rate oscillations are a mixture of very many different harmonics. So the power spectrum looks like a graph with many peaks of different heights. During paced breathing we expect heart rate to oscillate predominantly at a rate of pacer indicated on the graph with a green vertical bar. The more you are focused on breathing, the closer your HR oscillations would be to that frequency so the higher and narrower a dominant peak on the spectrum will be while other peak will tend to disappear. So your training goal would be to keep the highest spectrum peak close to the green bar.

Breathing plays a key role in our body function. Besides its main purpose of gas exchange (bringing oxygen for the body metabolism and removing carbon dioxide it produces), breathing helps to control body functions and connect with the mind.

All these phenomenal effects of special breathing exercises have been known for centuries, especially in many Asian cultures like Indian, Chinese and Japanese. Controlled breathing was practiced there as a way to achieve high levels of meditation and mindfulness.

Why does breathing have such power over our body? Deep breathing causes the parasympathetic nervous system to increase its activity which is responsible for the body’s involuntary physiological processes aiming to restore, heal and conserve vital energy. Shallow breathing has an opposite effect stimulating the sympathetic nervous system function preparing the body to fight for its survival also known as a stress response. So when we are in stress, deep breathing reduces stress allowing us to relax and heal. There are many research studies showing the power of breathing techniques helping not only to relax and calm but lower blood pressure, reduce anxiety and stress, improve immune system, digestion and provide many other positive effects.

As breathing is the only voluntarily controlled physiological process in the organism, it serves as a method to directly signal the brain to reduce stress providing relaxation, healing and increased mindfulness.

Let’s look at breathing techniques being practiced by millions of people.

First is deep slow breathing at a rate of about 6 breaths per minute. It aims to increase significant changes in heart rate synchronously with breathing. Heart rate goes up when inhaling and drops when exhaling. This phenomenon is known as respiratory sinus arrhythmia or RSA for short. A complex mechanism of neural regulation makes coupling between heart rhythm and respiration. Deep slow breathing brings us into the state of resonance maximizing heart rate oscillations. So watching these oscillations lets us see how the brain responds to breathing and evaluate its healing effects. This method is often practiced in stress reduction biofeedback training.

Yoga breathing is a whole group of breathing exercises being a key part of yoga practices. One such powerful exercise is square breathing which makes all phases of a breath cycle equal. It starts from higher breath rate and gradually reduces the rate after a few breaths each time. It may be combined with alternated nostril breathing when inhalation and exhalation is made through different nostrils.

Reading heart rate changes during any kind of breathing exercise is the best way to quantify how the breathing changes the regulatory function of the brain affecting various physiological functions, psycho-emotional state and the mind as a whole. During that process, it is very important to receive appropriate visual and auditory stimuli providing special guiding through the whole breathing exercise. This could be graphical metronomes shown on the computer screen or sounds intuitively giving a sense of breath cycles. In addition to nice relaxation music specially recorded suggestive speech could be used to enforce the effect of the breathing exercise.

We continue to develop our platform, and technologies. Subscribe if you would like to receive updates and special offers.